A grove of towering black walnut trees, twittering songbirds, and an air of opulent serenity greet visitors as they step onto Blennerhassett Island — a patch of about 500 acres in the middle of the Ohio River with a history all its own.

Only a 20-minute sternwheel boat ride away, the island is the perfect way to travel back in time, transporting history buffs and weekend-getaway lovers alike to the early 19th century.

Top Things To Do

Hover over areas of the map to learn more. 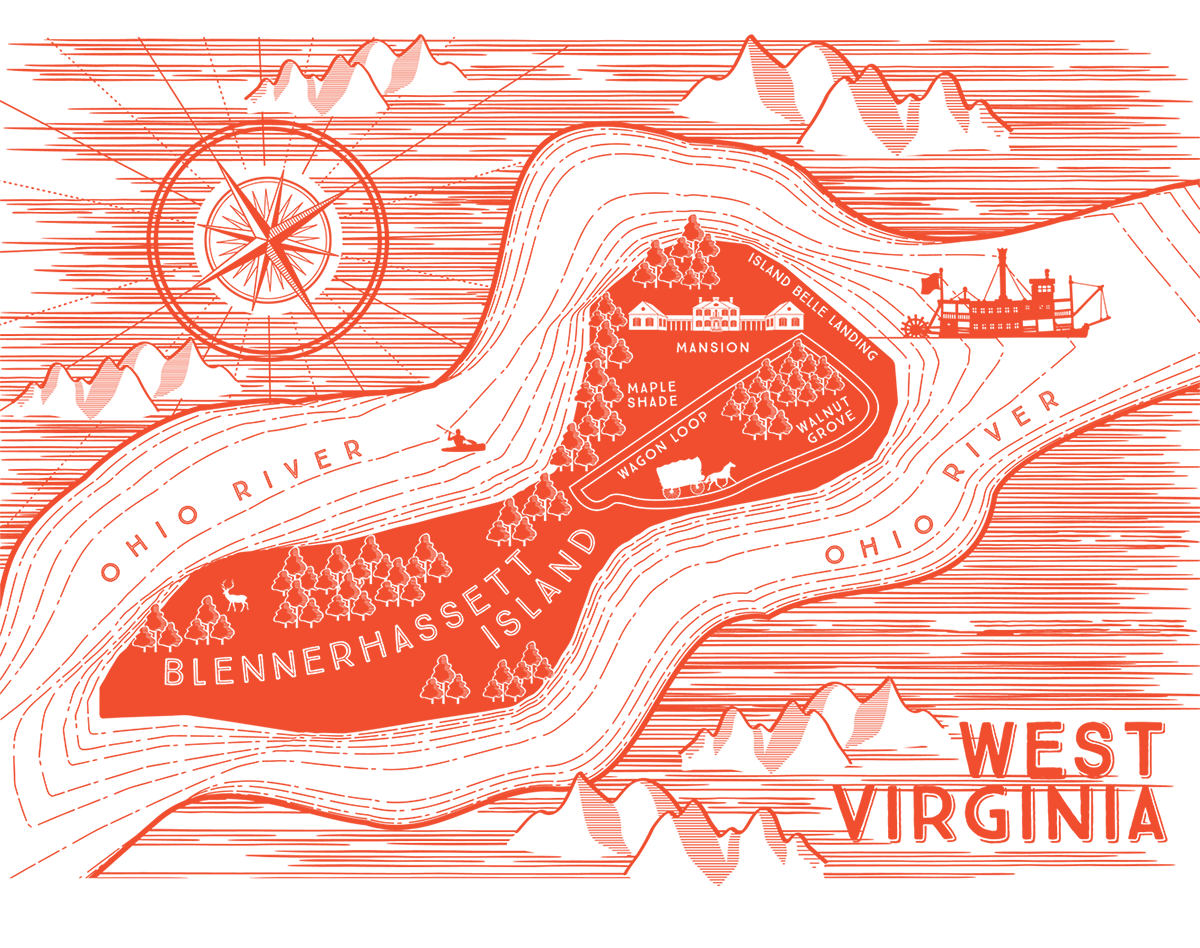 After arriving, the trail on Blennerhassett Island is perfect for walking or biking. You can either bring over your own bicycle on the boat or rent one once you arrive. Fishing from the banks on the island is permitted with the proper licensing.

At hundreds of years old, it is rare to find American Black Walnut trees as stately as the ones on Blennerhassett Island because many of them were cut down to build gunstocks during World War I. Wandering underneath their branches feels like taking a walk through a bygone era.

Reconstructed in the 1980s, the estate sits on the same foundation as the original estate, which burned to the ground in 1811. A tour, led by knowledgeable guides outfitted in historically accurate clothing, reveals the first and second floors of the mansion. Most of the Blennerhassetts’ possessions were lost in the fire, but some items have been recovered and are on display, including a piano belonging to Margaret Blennerhassett.

Pack up a basket and throw down a blanket for a peaceful luncheon outing. Maple Shade is an especially beautiful spot to relax. Picnic tables are also featured on the island.

To tour the island’s more remote areas, take a seat in a wooden wagon and let the horses lead you along the gravel track. The driver also serves as a guide, pointing out interesting facts and trivia along the way — like the site where a 400-year sycamore with a 37.5-foot circumference used to stand.

Harman Blennerhassett and his wife, Margaret, settled on the island in 1798 and began constructing an enormous estate. At the time of its completion, the house was the largest and grandest in the American West.

The Irish aristocrats enjoyed their time here, hosting gatherings at their home and living a luxurious lifestyle. The Blennerhassett plantation included magnificent gardens maintained by about ten slaves, who unfortunately lived in adverse conditions. (The Blennerhassett Island National Park currently does not feature a reconstruction of the slave quarters.)

About six years after their arrival on the island, misfortune struck the nobles.

Aaron Burr, the former Vice President of the United States under Thomas Jefferson, sought refuge on the island after he shot and killed Alexander Hamilton during their infamous 1804 duel. Burr and Harman became close acquaintances, frequently writing to one another after the politician’s departure. Eventually, their correspondence took a turn for the worse — a plot to commit treason and insurrection began to form.

The couple only returned to the island after death, as their bodies were relocated in 1996 to the gardens behind the recreation of the Blennerhassett House, which was built in the likeness of the original in the 1980s.

Not much is known about the history of the indigenous people on Blennerhassett Island, but human artifacts dating back nearly 13,000 years ago have been found on the property. These relics are on display at the Blennerhassett Museum of Regional History in Parkersburg.

One notable figure featured in the island’s story is Chief Nemacolin, the leader of the Delaware Nation, one of three federally recognized tribes of Delaware indigenous people in the United States. The chieftain and two of his sons were hired by a colonial trader to widen and improve a path through the Appalachian mountains to allow for westward expansion.

After this job was done, Nemacolin and his tribe settled on Blennerhassett Island. He died there in 1767, about 30 years before the Blennerhassett’s arrival. It is said that his remains are buried somewhere on the island, but the location is unknown.

Constructed in 1802, The Putnam-Houser House, nicknamed “Maple Shade,” symbolizes the westward expansion era. It belonged to Aaron Waldo Putnam and his wife, Charlotte Loring Putnam, who were friends of the Blennerhassetts.

Constructed in 1802, The Putnam-Houser House, nicknamed “Maple Shade,” symbolizes the westward expansion era. It belonged to Aaron Waldo Putnam and his wife, Charlotte Loring Putnam, who were friends of the Blennerhassetts.

Most of the structure is as it was in 1802 with few updates or reconstructions. There is so much history encompassed in the building that even the names and initials of family members and guests are forever preserved in etchings on several panes of window glass. The house has survived five generations of the Putnam family and a big move, as it was relocated via barge to Blennerhassett Island in 1986.

Purchase tickets for transportation to the island at the Blennerhassett Museum of Regional History located at 137 Juliana Street in Parkersburg or here.