The smell of hot coals simmering in the forge, the ring of the hammer against the pliable iron, the wonder at the iron’s state of delicacy then strength when tempered. Betsy Cook gets to experience the wonder of both science and history when she is sequestered in her forge in Lowell, Ohio, creating works of art.

It all began one day nearly 15 years ago when her farrier Carl came to shoe her horses.

“Carl, can I watch?” Betsy asked with piqued interest. As a child she was never one for art, she had the images in her head she just couldn’t seem to get them down on paper the way she wanted, but this was different, this she was falling in love with.

After that first experience, Betsy started going to workshops where she got to work alongside some wonderful blacksmiths from Williamsburg, West Virginia and Ohio and even one from Israel, who taught her the traditional methods and art of blacksmithing.

“It’s a history type thing but also the science of watching that iron change and become pliable, it was right up my alley and I fell in love with it,” stated Betsy who is a retired history, social studies and science teacher. 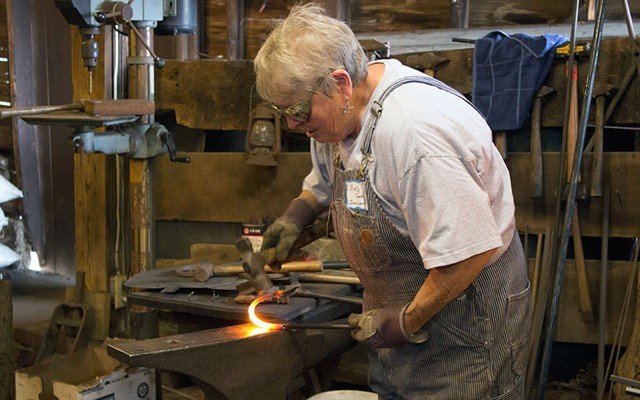 Betsy shared the thing she loves best about blacksmiths is, “there is not that whole thing about women can’t do anything,” Betsy said, “We have in our blacksmith creed that ‘we will show you how to do anything that we do that you want to see.’ Because when you go to do it no piece ever comes out the same, we each put our own twist to it.”

As an example, she shared how Carl, was very traditional and she is very contemporary. Carl loved the black iron look and she likes hers to look rusty and aged.

Three things you will find throughout Betsy’s work are found items, local glass and rust finish. One piece she made into a turtle whose shell started out as a planter plate. When she first saw it she “thought oh maybe I could make that into a turtle so I made the head and tail and belly and all that stuff,” Betsy said. 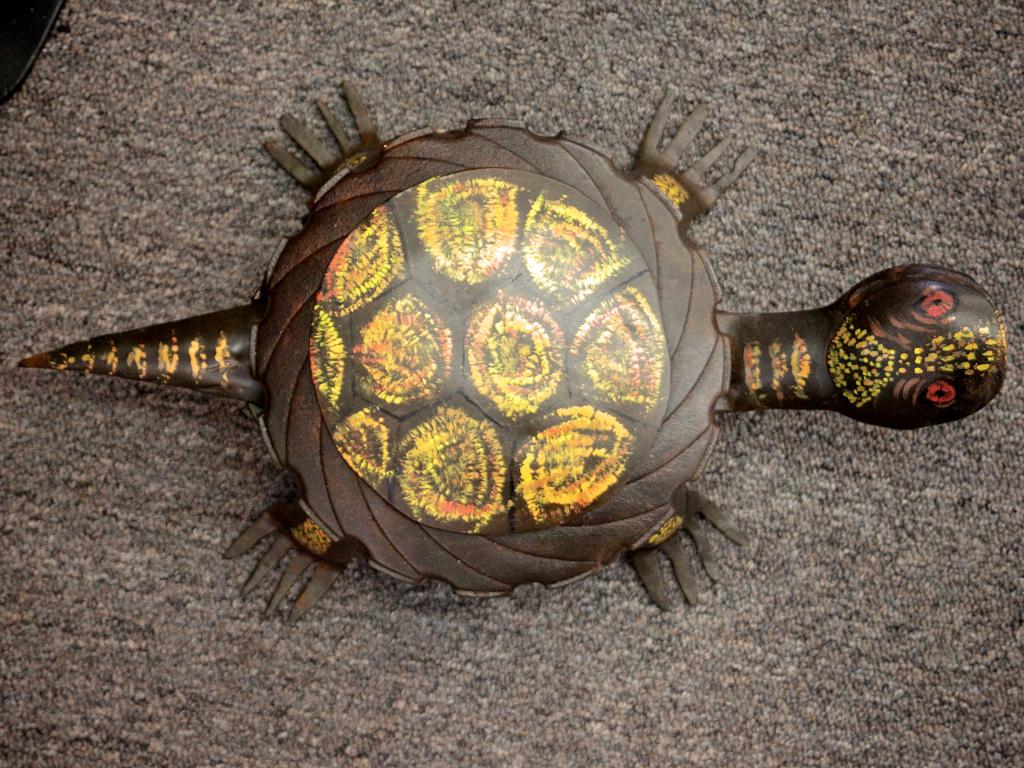 The local glass that she incorporates into some of her work comes from “Blenko glass, from Milton, WV, glass up the river here. These are hand-blown glass globes. They make the big gazing globes but they make these little ones for me,” she said. 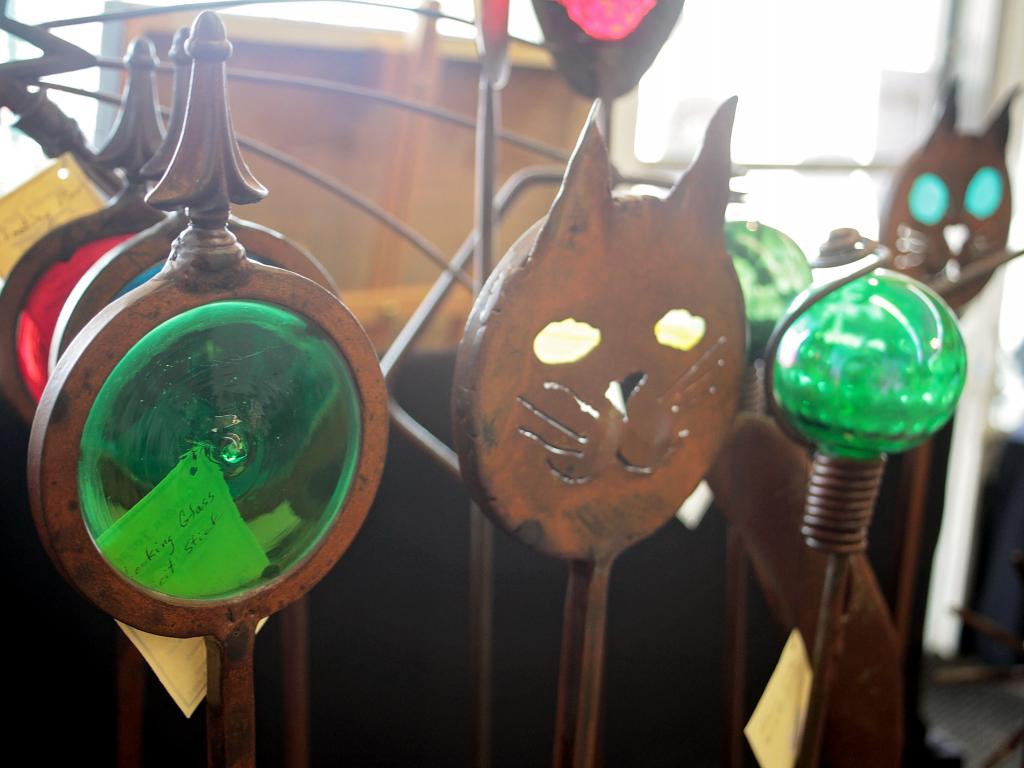 One of her most common works is called the ‘Tell Tale Tower’ which is an iron frame-like structure that is designed to either push in the ground, some come with stands and others are small enough to hang on the wall. Then personalized iron tiles can be slid down into the tower, each tile telling a story about you.

“The tops come off, and the tiles slide in and out so you pick the tiles, so maybe you like horses you would slide the horseshoe tile in,” Betsy said. 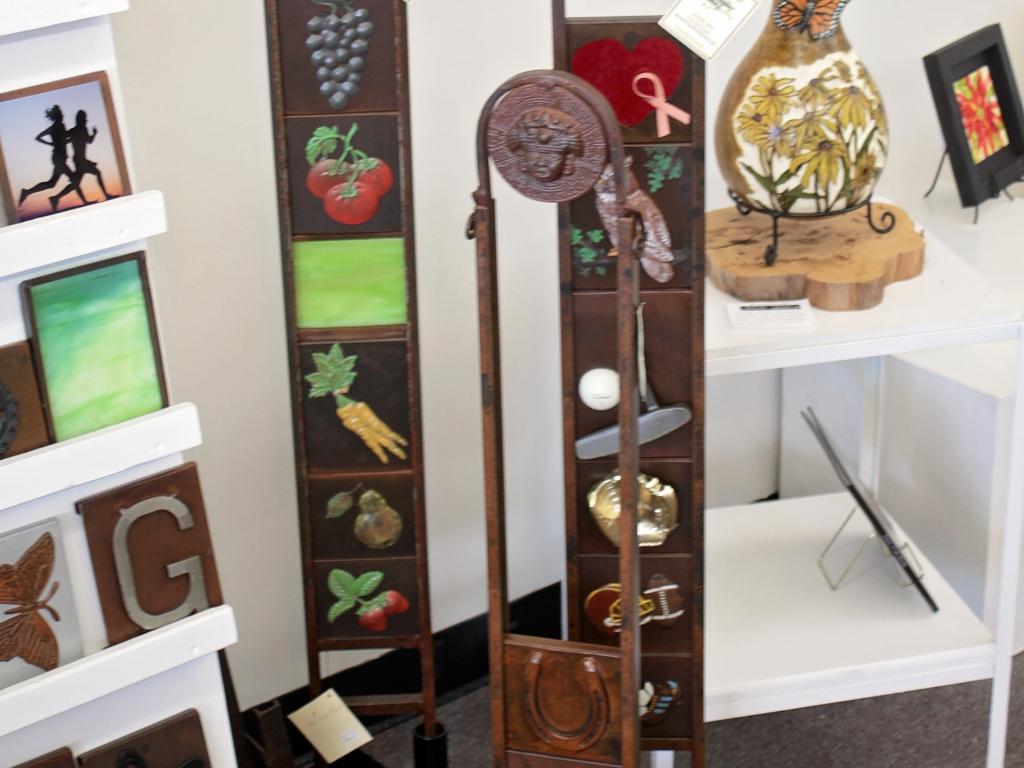 Besty’s most recent project is for a group of seven people who have gone together to purchase their mutual friend a retirement gift. Each person is designing a tile that Betsy will create.

“One of them played field hockey with her at Marietta college and she was a microbiologist so one of them is a microscope, and one goes to the movies all the time with her so it’s whatever they shared with her is the type of tile they are having made,” Betsy said.

She shared how once the tiles are complete the seven friends are going to throw a party and put the tower together.

“I’m just having a ball with this because it is just you learn so much about people,” Betsy said. She shared another story of a customer who liked a tree tile that she had forged and a grandmother came to her and asked if she could put her grandchildren’s birthstones around the branches like a family tree. This became the topper for her Tell Tale Tower.

“She and her grandkids go on trips together every year, Galapagos Islands, Disney world, skiing in Vale,” Betsy said, “and when she comes back she has me make a tile for each of those so they have a whole tower of their trips together.” 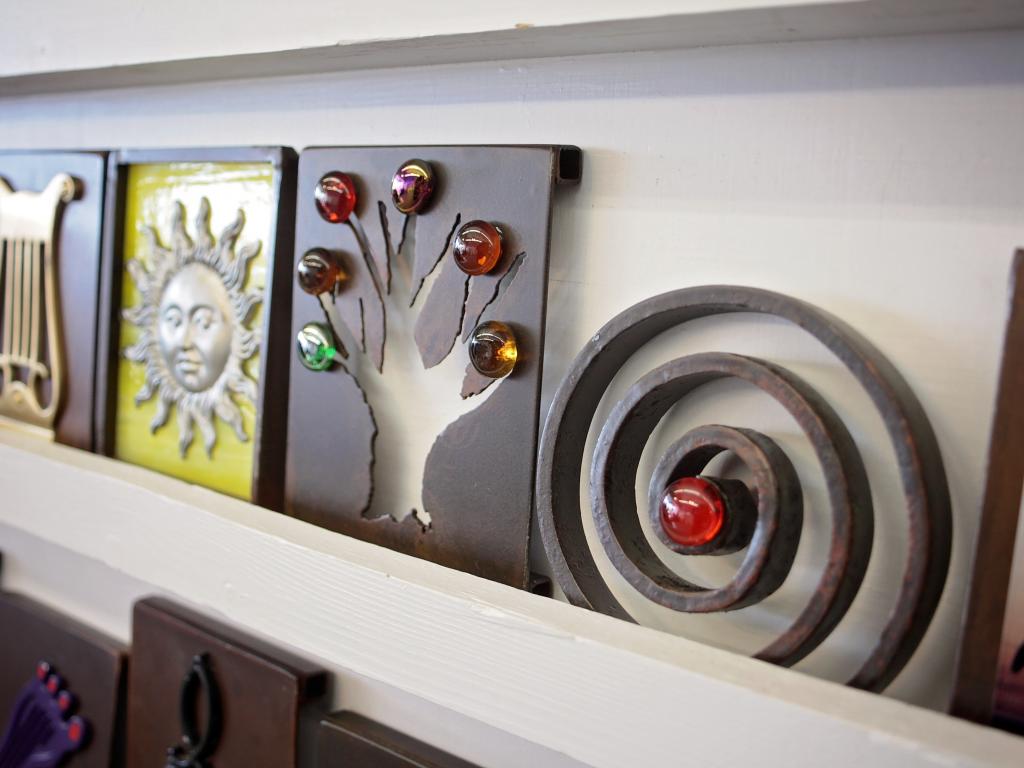 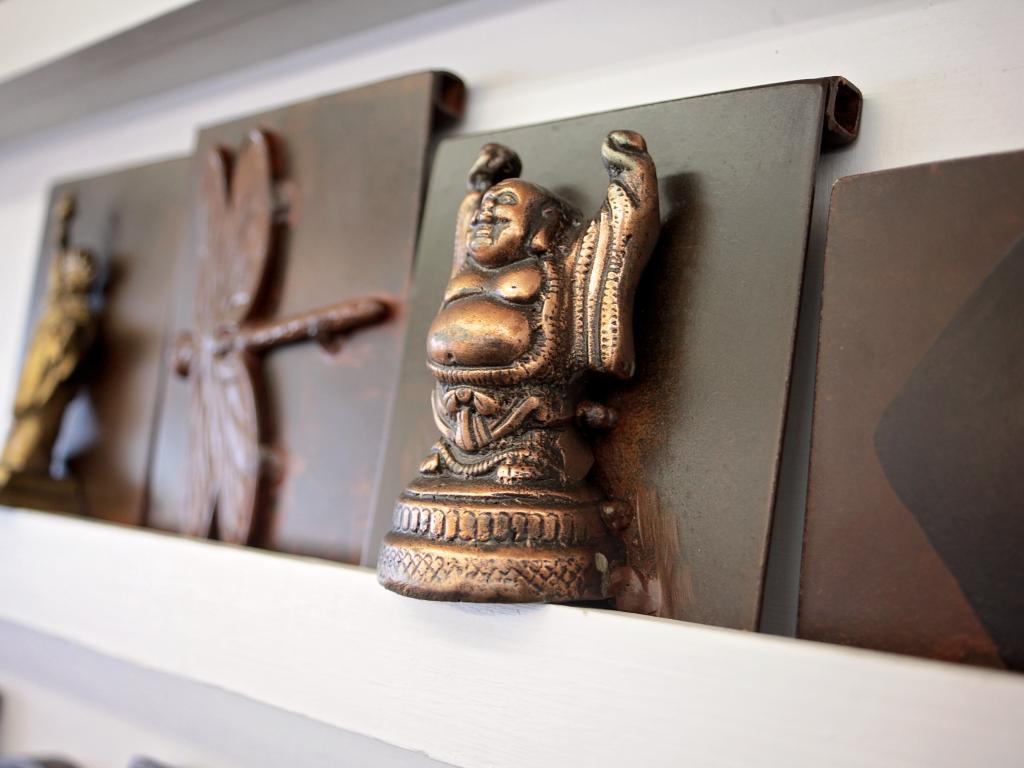 Many of her tile designs come from past customers’ requests, for example, a tile of two runners silhouetted against a setting sun came from “a grandmother who wanted to get a tower for the wall for her granddaughter who was going off to college and she was a marathon runner. And so we did a little shoe last, those metal shoe lasts like the cobblers used to use, and cut one of those like a tennis shoe and then added the cityscape of Columbus on there because that is usually where she runs her marathons,” Betsy said. 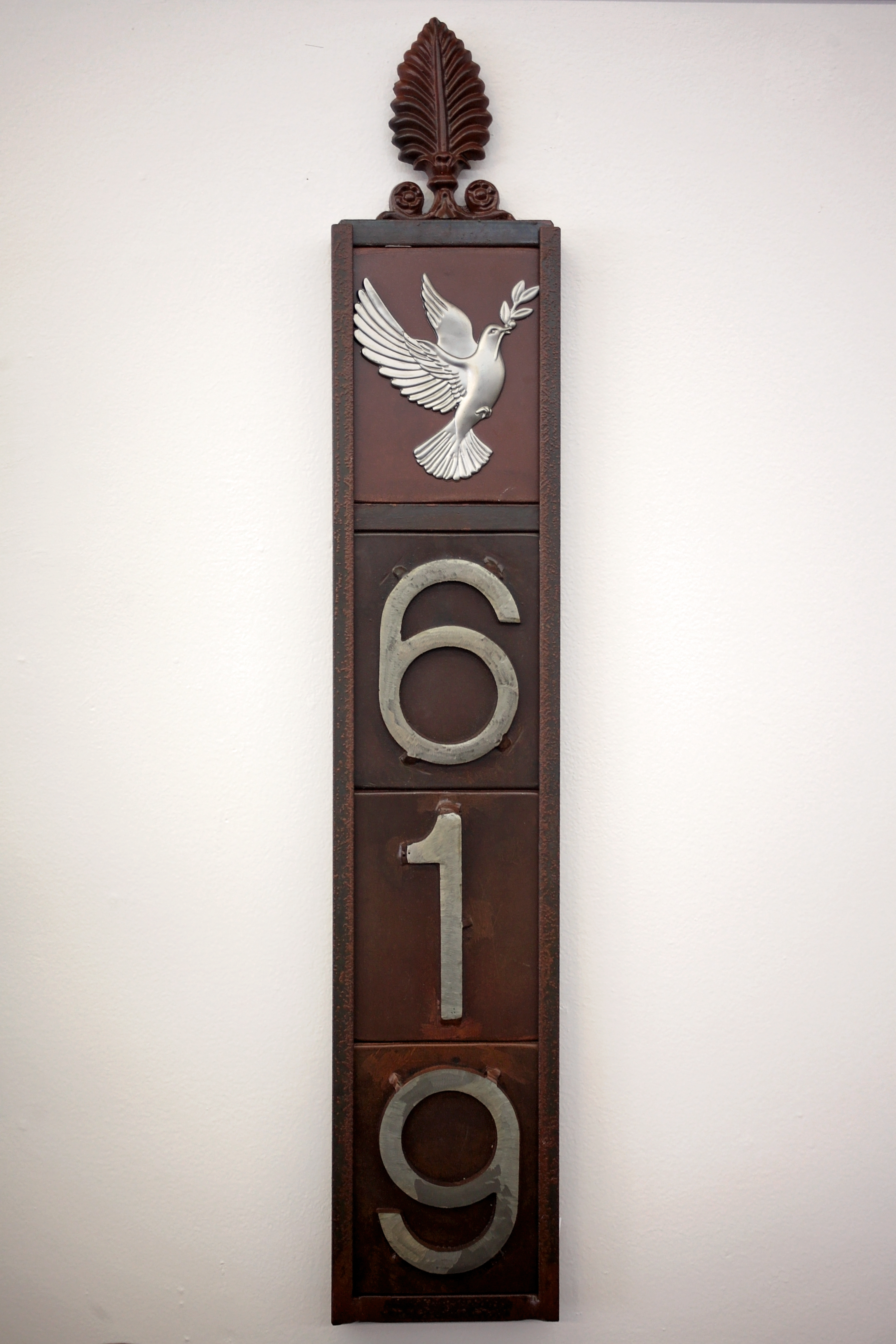 Betsy loves how her work brings people together and tells their story. One evening a mother and her 13-year-old daughter came into the gallery to enjoy the artwork, they soon became stopped at the Tell Tale Tower and began picking out tiles that told their story.

Betsy walked over and began talking to them and they shared the reason that they picked each tile in their tower. Although they couldn’t buy the complete tower full of tiles that day they had made yet another memory while building the tower.

“To see a teenager and her mom get along together was great,” Betsy said, “That’s the kind of stuff that I love about this.”

When Betsy is not creating art in her forge you will find her talking with visitors at the Riverside Artists Gallery on Second Street in Marietta. She is truly passionate about her work and the people she has been able to meet along the way. If you have a little time stop in and take a stroll through the gallery, you won’t be disappointed. 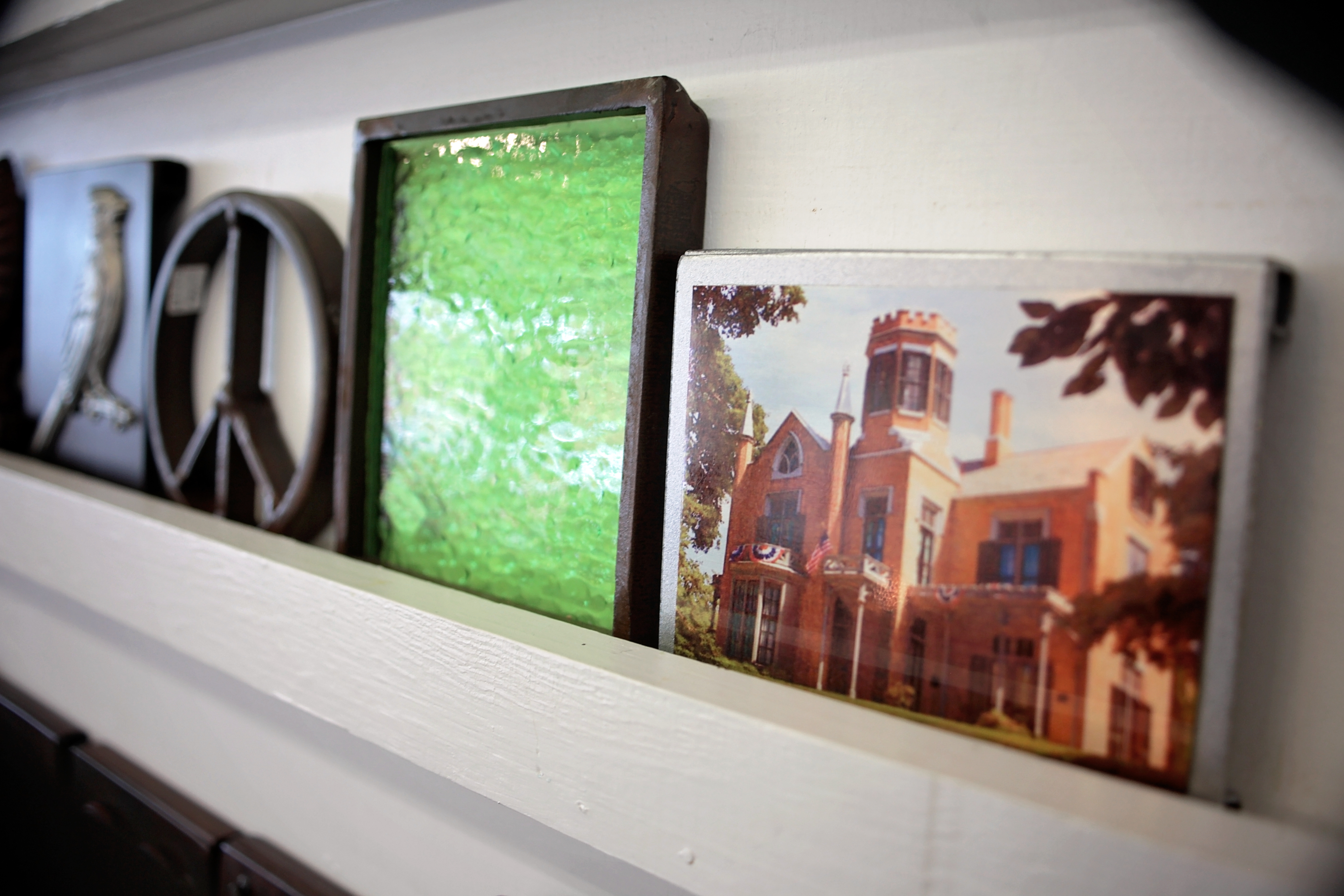