Each year the Blennerhassett Museum hosts a grand display of holiday trees on the first and second floors of the museum. Each tree is uniquely decorated to pay tribute to our heritage as Americans.

Here is the complete listing of trees on display for 2018. 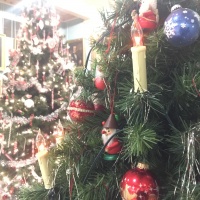 A Walk in the Woods – Friends of Blennerhassett

Let it snow! Let it snow! Let it snow!  The tree represents the peacefulness and beauty of the first snow of winter.  In its branches in the solitude of the woods, you see beautiful cardinals and wildlife watching the grounds below. Enjoy the showcase of mother nature.  Wooden cut out animals, berries, nuts and more adorn this tree.  Take a walk and see what you will find hidden among the trees this winter.

The traditional African ornaments of straw, wooden masks, woven balls, pine cones, and hand-carved animals adorn this tree.  Beaded figures of people and animals enhance the unique quality of the African culture.  Magnificent carved statues and figures surround the base of the tree.

In Australia, the holiday comes in the middle of summer–it’s not unusual for some parts of Australia to hit 100 degrees Fahrenheit on Christmas day. In Sydney, thousands of families prepare their Christmas dinner and take it to Bondi Beach for a picnic. Australians decorate with Christmas Bushes, plants with little red-flowered leaves that are native to Australia.   The ornaments on the tree remind us of the outback where you can find crocodiles.  Also, the boomerang is another item that is common to this country.

Canada’s Christmas celebrations are quite like American traditions.  In some Provinces of Canada, a big winter festival called “Sinck tuck” is celebrated with dancing and a present-giving day.  Since the red maple leaf is on the Canadian flag, we chose to decorate this tree with maple leaves.  You will also find the Canada geese, moose, sleds, pine cones and if you look close you will find the Canadian Mounty.

Red!  That’s the color you think of when you think of China.  The tree is decorated with traditional red Chinese lanterns, fans and masks.  The rice paper and bamboo umbrella is hand-painted and represents the unique traditional Chinese items used by their people.

Danish people celebrate Advent.  Trees are decorated with the country’s flag, ornaments in the National Colors of red and white and no tree would be complete without ornaments to show the love of family and God—the heart.  Danes only put silver or gold stars upon the tops of the tree.  This tree features the Christmas Elf or Nisse, golden balls and bows.  paper birds, white and gold stars and different heart-shaped ornaments.  This display has replicas of three common traditions:  The Kalenderlys, Pakkekalender and Danish Christmas plate.

This tree is recorded with red, white and blue ornaments to represent the colors of the Union Jack (flag) of Great Britain.

When you think of France, your mind goes of Paris, the Eifel Tower, and the vineyards.  This tree reminds us of the vineyards with the grapevines and grapes.  Other items representing the French culture are featured with culinary delights – croissants, bonbons and petit fours.  In addition, other traditional and cultures are reflected in the artist’s palettes and berets.

Little wooden figures and hand-crafted glass colored balls from Lauscha, Germany, are featured on the German tree.  The ornaments were acquired on some of the many foreign trips of Carolyn & Dwayne Rings during the past several years.

A native of Greece, Kiki has decorated her tree in the traditional blue and white colors that represent the sky and ocean.  Adorned with fans depicting scenes of the ancient Greek ruins, dolls dressed in traditional clothing, worry beads, religious icons, porcelains, golden tassels, flags, and the Olympic torch, exemplifies the Greek culture and lifestyle of this great country.

In India, there is no official celebration of Christmas. However, this time of year is looked upon as an appropriate time for gift-giving and tipping or giving “baksheesh,” charitable hand-outs to the poor of the country.  Some families in India decorate mango or banana trees at Christmas time. Sometimes they also decorate their houses with mango leaves. In some parts of India, small clay oil-burning lamps are used as Christmas decorations; they are placed on the edges of flat roofs and on the tops of walls. Churches are decorated with poinsettias and lit with candles for the Christmas Eve service.

The native country of Harman Blennerhassett’s youth is known for its beautiful green lands, handmade lace, gold and Celtic influence.  This Celtic history is depicted throughout the tree with the cross designs.  The colors of the Irish flag are symbolic – green representing the country’s Roman Catholics, organ for the Protestants of Ulster, and white for unity.

The beautiful cross, the Wiseman, angels and ornaments with verses of the Christ childbirth are reminders of the reason for the season.  In Italy, the Christmas season lasts for three weeks.  It starts eight days before Christmas and is called Novena.  At this time, children go from house to house reciting poems and sing.  On Christmas Day the pope gives his blessing to the multitudes that gather at the Vatican.  In Italy, children wait until Epiphany to receive their gifts on Jan. 6. 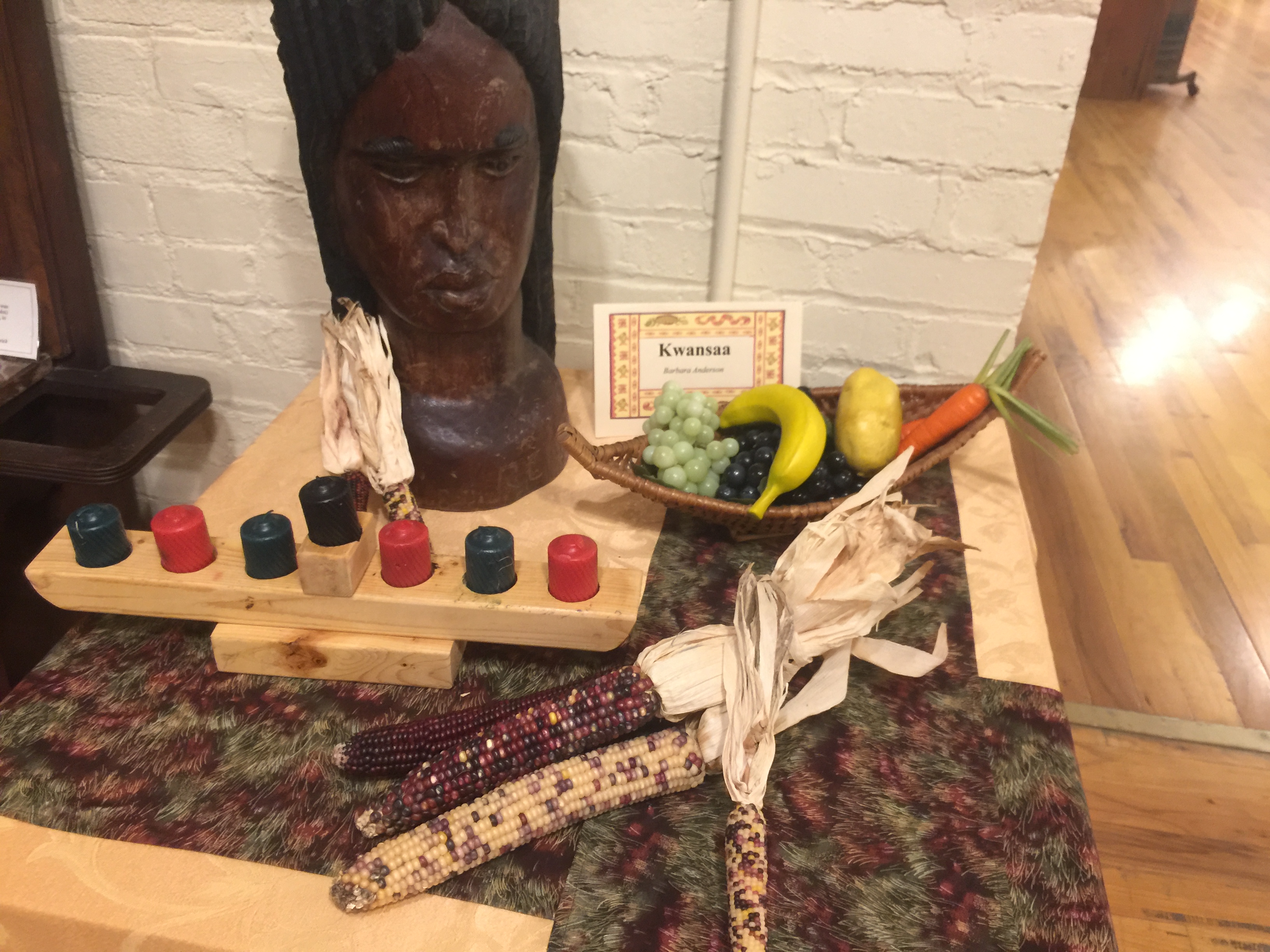 An African-American holiday that promotes respect for the individual traditionally has a display featuring three colors – black for the race, red for trials endured, and green for peace.  The community cup represents the unity of family and the extended family to the local community and finally to the world community.

Japan – The Friends of Blennerhassett  (Pashkevich’s)

This tree has been decorated with traditional colors and origami items depicting Japanese culture.  The origami crane shows honor and creates a symbol of hope.  Miniature kimonos of beautiful fabric adorn the tree.  Boxes and other Japanese collectibles are placed beneath the tree.

This tree is decorated with brightly jewel-tone ornaments.  It is a reminder of the brightness each of us has inside and we can all shine.

The nine days of the Mexican celebration are represented by the nine piñatas on the tree.  The Eden Island Garden Club has created straw ornaments, added white birds, candles, bells, dried chili peppers and a clay crèche beneath the tree to provide a cultural and traditional Mexican feeling.

The Netherlands (Holland) – The Friends of Blennerhassett

This tree is adorned with blue and white pinwheels that are symbolic of the wood windmills we associate with Holland.  Cookies and other homemade treats would adorn their trees.  Beneath the tree are items that remind us of Holland and the culture of the Netherlands – Delft ceramics and wood Dutch shoes.

Everyone can relate to the universal red and white twist of the sweet sugary confection known as the candy cane.  Perhaps you can recall the Peppermint Twist as the name of a song written by Joey Dee and Henry Glover in 1961 and recorded by Dee and the Starliters.  How many can remember doing the dance called the Twist.  These are all great memories and moments in time we can treasure.  We hope you enjoy the “Peppermint Twist” tree. 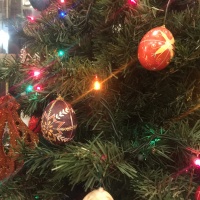 Early pioneers made items to put on their trees and added natural items such as pinecones, baskets, twigs, nests and nuts.  Gifts were usually made such as hand-sewn dolls or carved wooden toys.

Christmas carols are important to the Romanians.  These carols are believed to have wide windows that open to the heavens as they give praise to Christ.  The carol singers walk in the streets of the villages and towns.  There is always a big feast to celebrate Christmas.  The ornaments on the tree are hand-blown glass made in Romania.

The wooden figures and nesting dolls are part of the collection which Carolyn and her husband, Dwayne, assembled during their trips to Russia.  The tea towels and dolls are handcrafted and represent the traditional dress of Russia.  The ornaments are hand-painted and decorated with vivid color which Russian artists are known for using.

Sheep, golf balls, hunting horns and pine cones all bring to mind activities associated with Scotland.  But no tribute to Scotland would be complete without the “Plaid” prominently displayed.

Slovakians who are mainly Roman Catholic begin the season with Advent.  They take great pride in the Nativities.  Each family will bring out the Creche which has been handed down from generation to generation.  The Creche is a box-type structure the trees sit on.  Trees are usually live and rarely exceed 3 feet.  This tree is decorated with Slovakian flag stars, twisted twig shapes, pine cones, fruit and tinsel stars.

The Spanish tree is decorated with bright and shiny gold,  red and blue ornaments, fans and coins.  It is a family tradition that they make their own Nativity and place it beneath the tree.

Spirit of Christmas – Friends of Blennerhassett

We call this tree the “Spirit of Christmas” because this tree and its ornaments were a gift to the Friends of Blennerhassett from Kr. Kahlil and his wife.  This represents a giving heart and the spirit of what Christmas truly is.

Swedish families gather early in the season to craft their own Christmas tree decorations.  Traditional ornaments include braided hearts, beads and wooden figures.  On Christmas Eve, families exchange gifts, often dance around the tree and later enjoy a Christmas feast

Tree of Jesse – Friends of Blennerhassett

The Jesse Tree is a unique tree and a gift from Barbara Anderson.   It represents the family tree or genealogy of Christ, foretelling of Christ, salvation’s plan from creation to the coming of the Messiah.  On each day of Advent, a homemade ornament is added to the tree.

Tree of Presidents – Friends of Blennerhassett

As the dust settled from the Revolutionary War, America’s founding fathers hashed out a three-branch political system that was entirely novel. An elected civilian—the president of the United States of America—would lead the federal government, enforcing the laws of the land and acting as commander-in-chief of the armed forces, heading a governmental structure that has remained in place for more than 200 years.

For many years, the people of the Ukraine area of Russia have decorated eggs with various religious symbols.  Each egg is created by a precise application of wax and liquid dye.  The process is very tedious and can require multiple layers of wax and dyes to create various colors and designs. 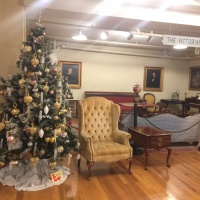 The Victorian era trees were elaborately decorated.  Some families had small tabletop or large trees in the center of the parlors.  Every inch of the tree would be decorated and lit candles were typically used.

The West Virginia tree was introduced in 2013 to commemorate the 150th anniversary of West Virginia becoming a state on June 20, 1863. We are currently celebrating 155 years of statehood.  Artisans, organizations, and individuals submitted ornaments showcasing some of the many places that make this state great.  These ornaments complement the blue and gold colors.  Remember the state moto….” Mountaineers are Always Free”. 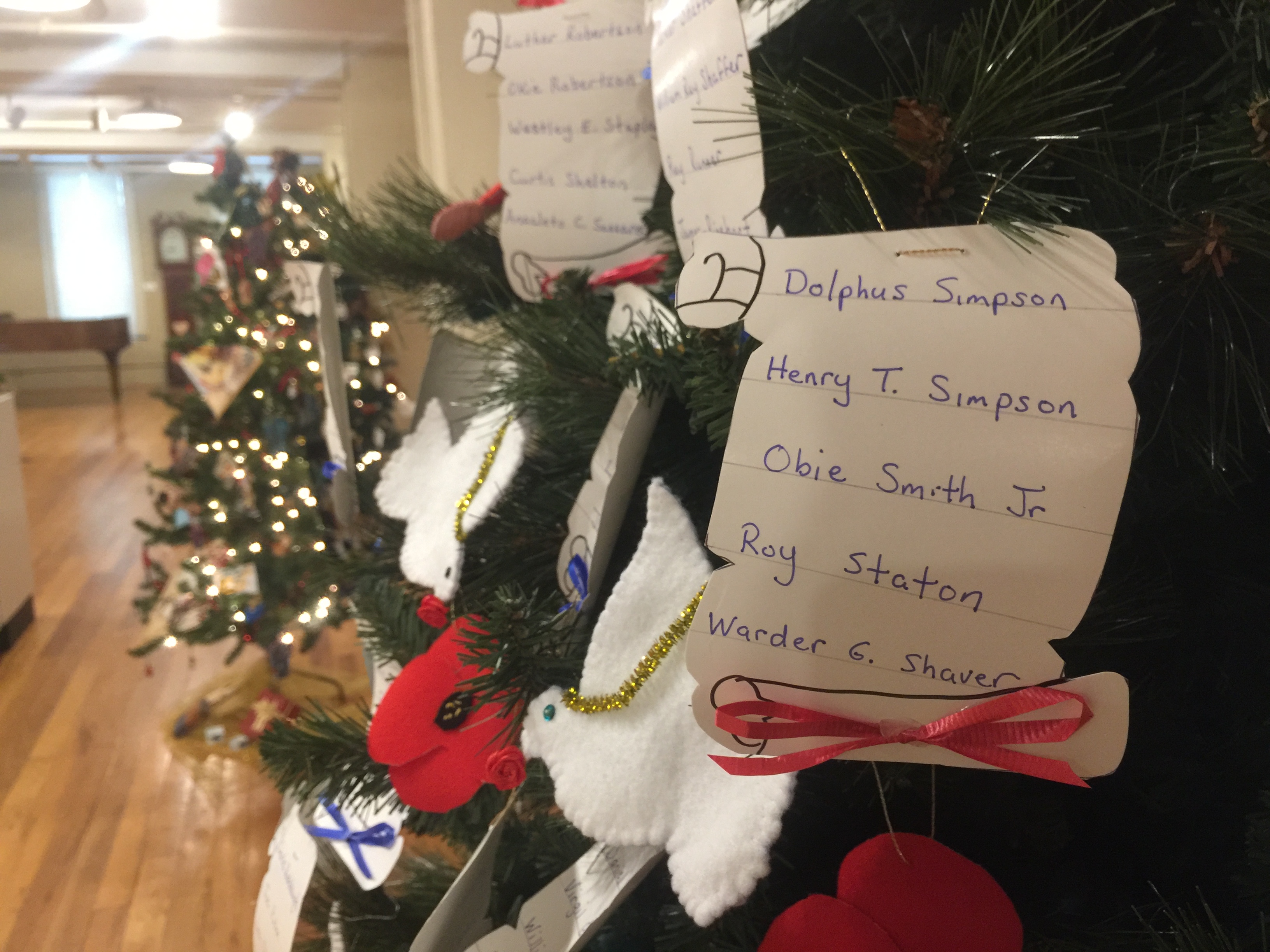 World War I, also known as the First World War or the Great War, was a global war originating in Europe and lasted from July 28, 1914 to November 11, 2018.  Over 58,000 West Virginians were called to service between 1914-1918.  Nearly 1,800 died during this time.  World War I ended the 11th hour of the 11th day of the 11th month in 1918.  White peace doves with red roses of honor, paper scrolls bearing the names and red poppies pay tribute to these brave souls.  The gold stars are for the families of the fallen and a blue star tops the tree in honor of all families who sent loved ones off to war.

“Sleigh bells ring, are you listening…. walking in a winter wonderland”.   Let the holiday magic begin as the bright light reflects on the blue, silver, and white ornaments which might remind you of taking a walk in the snow on a cold winter night.